The scorn towards Spartacus revealed by a collection of less than biased histories clearly depicts the loss of nerve among the ruling classes in Republican Rome. It is possible that some commentators focused on the history of Spartacus's "noble origins" in an attempt to explain why a slave, perceived by the elite as a sub-human category, could embody both charisma and intelligence and continuously humiliate the Roman military in battle. Cicero, a famous Roman orator, "viewed Spartacus and those who followed him as sinister insurgents who deserved their fate and who were to be despised as servile people." Despite the great disdain toward Spartacus, his actions did have both immediate short term and long term consequences on Roman Society. 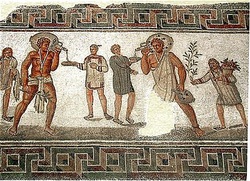 Roman mosaic from Tunisia:
two slaves carrying wine jars
Spartacus left an impact on the relationships between slaves and their owners and arguably influenced a short term slave shortage.

In the immediate years following the revolt, bandits, mostly men left over from the slave army, harassed noble travels who crossed their paths. Some bandits were also able to roam pastoral lands virtually unchecked by Roman authority. Approximately five to ten years after the death of Spartacus, it was not uncommon to see hired gangs of ex-gladiators and runaway slaves. Organized manhunts for escaped slaves would also become a profitable enterprise in certain parts of Italy.

In addition, the slave revolt led by Spartacus resulted in an short term shortage of slaves. A substantial number of fresh slaves from foreign conquest were made unavailable due to a domestic counter-offensive against Spartacus, which "prevented foreign intrigue." Consequently, there was a noticeable increase in debt bondsmen, or "people who sold themselves for a definite period as a slave for money or release from debt, including  as gladiators." This short-term affect on slavery in Rome was surprisingly dramatic. It is possible that there was less than 750,000 slaves in total in Rome, a significant reduction following the period of slave trade from previous conquest and expansion in Roman history.

Despite the changes mentioned above, the economic system of slavery in Rome could not be broken. In fact, the conquest of Gual by Julius Caesar, which occurred after the third Seville War, resulted in "400,000 more slaves coming onto the market." It is highly unlikely that the eradication of the slave system was a goal of either Spartacus or other numerous past slave revolts. In "Two Aspects of the Spartacus Slave Revolt," Barry Baldwin points out that in the first Sicilian War, the insurgents who were slaves themselves personally, and unsurprisingly, did not like being slaves. However, they "had no objection to slavery as an institution." Spartacus's followers would include many people of this type. Although he might have led to a re-kindling of anti-Roman sentiment, this was by no means an anti-slavery movement. "No Italian city joined him by choice, nor did his outbreak inspire a slave disturbance in Rome such as Eunus had achieved."

This was a period of "accumulation of capital in the human form" and simply could not be eradicated from Roman society. Eventually, the supply of slave labor would stabilize as a result of the complex combination of available sources. As the historical origin of the slave system, prisoners of war continued to keep slave markets alive. Although it was not enough to supplement the needs of the economic system, slave marriages were often encouraged, and the slave offspring bred from the union stayed within the family. In addition, common sources of slaves included kidnapping victims as well as children sold into slavery by their parents.

Statistical data concerning the long-term decline of slavery in Rome as a result of the Third Seville War is highly contested. Some academics have argued that there "was no serious long-term drop until 150 [CE]". Slavery certainly diminished in the later stages of the Roman Empire during the first years of the "Middle Ages." This period would be characterized by a shift from slavery to a system of serfdom that would dominate the future economic system of Western Europe.
Powered by