During the expansion of the Roman Republic, Rome created somewhat of a "revolt friendly" republic. While the Romans were conquering they took many prisoners of war from the defeated armies. Rome then forced these prisoners of war into slavery, primarily on the latifundias ( 300+ acre estates owned by Senators or Equites). This large volume of slaves in Rome created an unavoidable and very real threat of revolt. This fear of revolt even led to the execution of all 400 slaves belonging to Pedanius Secundus, as ordered by the Senate. However, the envy of freedom still outweighed the fear of punishment for many of the slaves. 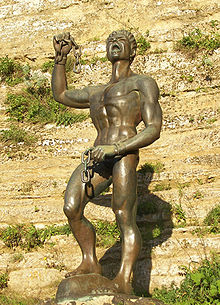 This is a statue of Eunus which
currently stands in Enna, Sicily.
You can see the broken chains in
each of his hands signifying his rebellion.
Sicily was a land with widespread wealth which allowed them to buy a tremendous number of slaves. These slaves were branded and marked upon arrival to show who they belong to as if they were heads of cattle. To say the slaves were mistreated would be a terrible understatement. They were nearly beaten, starved, and worked to death.  The slaves finally decided they could take it no longer and began meeting whenever possible to discuss a plan to revolt. After all of the planning, it was time to put their plan into action.

A man of Enna named Damophilus was a very wealthy slave owner who, along with his wife, was very cruel to his slaves. When the slaves decided to take a stand and strike back they gathered over 400 slaves, armed themselves, and began wreaking havoc on the entire city of Enna. First, however, they executed a plan to murder their master Damophilus and his wife as well. As the slaves' revolt spread through the city, they picked up many more slaves from from the city of Enna who slaughtered their masters first as well before continuing their massacre of the city. The growing slave army showed no mercy to anyone. Men, women, and even babies all suffered and were killed.

With the expansion of the army, they decided to elect a king to lead them. A slave from Syria named Eunus was named king. Oddly, he was not selected as king because of his intelligence or his fighting abilities, but only because he was supposedly able to predict the future. One of his first acts as the slaves' king was an order to execute all the people of Enna, with the exception of those who were talented weapon makers. Over three days, he armed his now over 6,000 man army and began a march through the countryside where he picked enough slaves to nearly double his ranks. Eunus's army now had over 10,000 slave soldiers, and Eunus himself had no lack of confidence. He even stood up to Roman generals and their armies, successfully. His victories, however, were mainly a result of his advantage in numbers. Regardless, his revolt was the event that set off a chain reaction of slave revolts across Rome, but many were unsuccessful and stopped almost as suddenly as they had started.

Terror and destruction continued in Sicily. A multitude of armies were defeated by these rebel slave troops, cities were captured by these slave armies, and inhabitants of these captured cities'  were enslaved by the rebels. This continued until the Roman general Rupilius was able to recapture Tauromenium, a city on the east coast of Sicily. Rupilius confined the slave army to the city and forced them into starvation to the point that they even resorted to cannibalism. Sarapion, a Syrian slave, finally gave in and betrayed his army, allowing Rupilius to defeat the slave army occupying the city. Rupilius slaughtered the slaves after intense torture. Rupilius then marched to Enna and defeated that slave army in almost the same fashion with the help of a treasonous slave.

King of the slaves, Eunus, fled to to a nearby cliff with his bodyguards. With general Rupilius headed their way, and imminent defeat, Eunus's bodyguards resorted to cutting off one another's heads. As for Eunus, he was captured by Rupilius and thrown in prison where he was slowly eaten alive by lice.

Around 800 Italian slaves were deemed free in 104 B.C. in Sicily. Naturally, this frustrated many of the non-Italian slaves and even fooled many of them into believing they had been freed as well. Slaves were abandoning their masters due to this confusion, and a rebellion erupted out of this mistreatment and miscommunication. The rebels elected a slave named Salvius as their leader, although he assumed the name Tryphon, which stemmed from a recent Seleucid ruler named Diodotus Tryphon. Just as in the first Sicilian slave revolt, the rebel army gained followers rapidly. Salvius had an army of 20,000 men and 2,000 cavalry at his disposal. He was also joined by an infantry from western Sicily headed by Athenion. Just as in the first Sicilian war, it took remarkable effort from Rome to dispose of the rebellion. After four long years, the Roman consul Manius Aquillius was finally able to end the revolt in 100 B.C..

The third and most notable Servile war is the one that took place on the mainland of Italy. This slave revolt was led by the famous escaped gladiator, Spartacus.

When Spartacus's revolt began, Roman military leaders did not take the situation too seriously which led to several Roman militias being defeated by Spartacus and his men. Due to his success, Spartacus gained more men in the region of Campania. His army quickly grew to an astonishing 70,000 men. Spartacus's army continued to gain followers with each battle  and victory. This caused the Roman Senate to finally get serious about Spartacus's revolt.

Crassus raised a Roman army of over 40,000 men to challenge Spartacus. Pompey, the Roman general at the time, was also supposed to bring troops, but Crassus wanted to defeat Spartacus prior to this for personal glory. Crassus pressed the war and divided Spartacus's army almost immediately. Spartacus realized that reinforcements were on their way (Pompey) and decided to take on Crassus's troops rather than retreat. Crassus successfully defeated the rebel army and killed Spartacus as well. 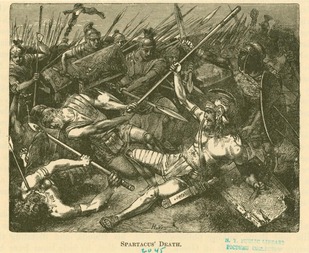 This image depicts Spartacus fighting up until his death at the hands of Crassus's men.
Powered by