Early Life of Spartacus and The Uprising 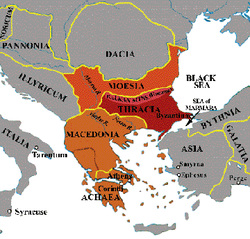 Map depicting Thrace
Although little is known about the early life of Spartacus, it is believed that he was born in Thrace, an area in the modern day Balkan region. It has also been suggested that Spartacus received training from the Roman army, most likely as an auxiliary. He was sold into slavery in 73 BCE to a man named Lentulus Batiates. L. Batiates taught at a ludus, or school, for gladiators in Capua, a city located in Campania about twenty miles north of Mount Vesuvius.

That same year Spartacus and two other Gallic gladiators led a riot at the school, and about 80 gladiators were able to escape, using kitchen tools as weapons. Plutarch states that the motives behind the slave revolt were due to the cruelty and poor living conditions that the slaves were subject to:

"Most of them were Gauls and Thracians. They had done nothing wrong, but, simply because of the cruelty of their owner, were kept in close confinement until the time came for them to engage in combat."

Among the seventy-eight slaves to escape was his wife, who according to Plutarch, "was a prophetess subject to possession by the frenzy of Dionysus." After Spartacus was seen with a snake coiled around his head while he slept it would be his wife who would declare "that this sign meant that he would have a great and terrible power which would end in misfortune." A large number of escaped slaves joined Spartacus and his group as they continued southwards seeking a refuge point. In the streets the band of slaves was able to acquire weapons through raiding. They successfully fought off those who pursued them from Capua and confiscated their arms in exchange for their own gladiatorial equipment before seeking refuge by Mount Vesuvius.

Their insurrection would come to be known as the Third Servile War, or the Gladiators' War. 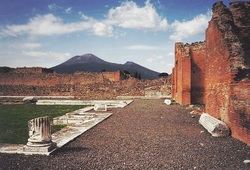 The slopes of Mt. Vesuvius as seen from Pompeii
Praetor Claudius, with 3,000 soldiers, was sent out against the rebel slaves from Rome. However, the Romans did not view the affair as a war, but rather as a "raid akin to piracy" and as a result his forces were composed of those who could quickly conscript rather than a proper military force. Rome simply did  not take Spartacus's growing force as a serious matter.

Claudius took up a position on the hill that blocked off the only path from which Spartacus and his force could exit in an attempt to starve the slaves out. Spartacus, who was said to be both strong and intelligent, and the group of newly liberated slaves he led would use the fertile lands of Mount Vesuvius to their advantage. Plutarch writes:

"The top of the hill, however, was covered with wild vines and from these they cut off all the branches that they needed, and then twisted them into strong ladders which were long enough to reach from the top, where they were fastened, right down the cliff face to the plain below."

Spartacus and his men were able to take the Romans completely by surprise resulting in a Roman defeat.

The second expedition against Spartacus was led by Publius Varinius, who roused a force of 2,000 men. Spartacus watched his movements very carefully and almost captured Publius.  He took all of his baggage, and in a later fight was able to capture Publius's own horse.

Spartacus's victories illustrate his remarkable skill in creating a force capable of challenging Rome, and consequently a great number of shepherds and herdsmen joined his ranks. The growth of his forces was also aided by other factors, such as the time he spent in rural areas and small towns, places that were notorious for their lack of defenses and abundance of slaves. In addition, it was said that he split the spoils of war evenly amongst the men. Unfortunately, Spartacus had caught the attention of Rome, and the Senate was forced to take his revolt seriously.

Spartacus and his forces began to push northward towards the Alps, for although he had grown in power he did not expect to overcome the whole power of Rome. He hoped to cross the mountains and then disperse toward their own homes, mostly to Thrace and some to Gual. However, the men did not listen to him and continued to pillage throughout Italy.

Since the situation had risen to inspire real fear within Rome, both consuls, Gellius and Lentulus, were sent to deal with what was now considered a "major war." Although the German contingent of Spartacus's troops were crushed by Gellius, Lentulus was defeated by Spartacus who then proceeded to capture all their equipment. As Spartacus continued northward, he was confronted by Cassius, governor of Cisalpine Gaul, with an army of 10,000 men. Again, Spartacus rose victorious, and Cassius was barely able to escape with his own life. 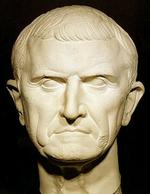 Bust of Crassus
After hearing news of Rome's defeat, the Senate was greatly angered. The Consuls, Gellius and Lentulus, were told to return to civilian life and Crassus, distinguished both by his family and extreme wealth,  was appointed to be supreme commander of the war.

Crassus took up a position on the border districts in preparation to fight Spartacus as he made his way down to Picenum. Although there are various accounts of Crassus's orders and instructions, Plutarch states that Crassus "ordered one of his subordinate commanders, Mummius, with two legions to march round by another route and instructed him to follow the enemy, but not to join battle with them or even to do any skirmishing." However, Mummius saw what he thought was a good opportunity to strike at Spartacus, engaged him in battle, and was promptly defeated. Many of the men were killed, but some were able to escape by abandoning their arms and fleeing battle. Crassus punished the cowardly men with decimation, a process by which after drawing lots every tenth man is killed.

"He re-armed the soldiers and made them give guarantees that in the future they would preserve the arms in their possession. Then he took 500 of those who had been first to fly and had shown themselves the greatest cowards, and dividing them into fifty squads of ten men each, put to death one man, chosen by lot, from each squad. This was the traditional method of punishing soldiers, now revived by Crassus after having been out of use for many years."

After the decimation, Crassus tried to advance on Spartacus, but he had slipped away to the sea with the intention of sailing toward Sicily by crossing the Strait of Messina. After claiming victory against Cassius, Spartacus and his men were free to cross into areas of Thrace and Gaul not controlled by Rome. However, him and his men chose not to cross the daunting Alps and instead turned back toward Italy. Although there are many theories as to why this happened, Barry Strauss writes in his book, The Spartacus War, that "the best explanation [has] already been hinted at in the ancient sources. Spartacus's own men probably vetoed him." Their recent success had gone to their heads, and now they desired to see Rome in flames. It is also possible that the tall Alpine mountains proved almost impossible to cross.

At the Strait of Messina, Spartacus fell in with some Sicilian pirates. His original plan, as told by Plutarch, was to take some pirate ships to Sicily with 2,000 men and seize the Island. Because the slave war had recently died down, he thought that a slave revolt in Sicily would be enough fuel to rekindle the flames. The Sicilian pirates, after accepting his gifts and agreeing to his proposals, sailed off and deserted Spartacus and his men. After failing to cross the straights themselves, Spartacus had no choice but to take his men northwards where Crassus waited.

Rather than try to openly battle Spartacus in southern Italy, Crassus built a system of fortifications in an effort to trap Spartacus and starve out his troops. Spartacus sent Crassus a peace treaty which was quickly rejected. Appian writes:

"Spartacus, who was waiting for some cavalry that were on their way to him, no longer went into battle with his full force, but conducted many separate harassing operations against his besiegers; he made sudden and repeated sorties against them, set fire to bundles of wood which he had thrown into the ditches, and made their work difficult. He crucified a Roman prisoner in no-man's land to demonstrate to his own troops the fate awaiting them if they were defeated."

When the calvary had arrived, Spartacus made a desperate attempt to break through by filling one of the ditches and punching through with his Calvary. Although he escaped Crassus's trap, there were serious consequences for his army. He had lost a significant number of troops, and a dissident group of Germanic and Celtic troops led by Castus and Gannicus split from his forces.

After hearing word of the siege, the Senate quickly summoned Pompey from Hispania and Lucullus, who was about to land in Brundisium. Upon hearing this news, Crassus was eager to end the war in an effort to keep Pompey and Lucullus from claiming any of the glory. Spartacus's troops were divided and quickly being surrounded, setting the stage for the final battle.

Movement of Spartacus and Crassus in 71 BCE 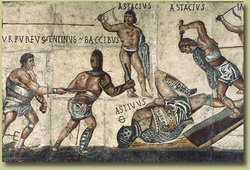 Mosaic depicting Gladiators
Things began to fall apart for Spartacus during the spring of 71 BCE. Both Castus and Gannicus, leaders of the dissenting Celctic and German slave force, were defeated at the battle of Cantenna, In additon, Spartacus recieved news that Lucullus's force had landed at Brundisium, cutting off its use and crushing Spartacus's hopes of using the port to escape Italy. Spartacus and his men headed out to face Crassus.

The final battle took place in April 71 BCE. Plutarch states that just before the battle, Spartacus gets off his horse and kills it telling his men that, "the enemy had plenty of good horses which would be his if he won, and, if he lost, he would not need a horse at all."

Although Spartacus had developed a two-fold strategy that employed his calvary to kill Crassus's archers and throwers  while he led an infantry attack, the battle went poorly for him. Spartacus was able to cut down two centurions, but his efforts were in vain. He charged at Crassus, but was wounded in the thigh by a spear and went down on one knee, holding his shield in front of him and continuing to fight. However, he was surrounded by enemies and killed.

Aftermath: Triumph of Pompey and Crucifixion

Although not Roman,
the Orpheos Bakkikos is an
excellent example of
crucifixion in the ancient world
There was still a large number of fugitives that had to be pursued after the battle by Crassus and other Roman forces. According to Pompey, the victory of Crassus, therefore, helped to add to Pompey's fame since it was his troops that assisted in destroying the fugitives that survived the final battle. As a result Pompey was able to claim to the Senate that it was he who dug up the war by the roots. Plutarch writes:

"Pompey then celebrated a magnificent triumph for his victories against Sertorius and for the war in Hispania, while Crassus, much as he may have wanted to do so, did not venture to ask for a proper triumph; indeed it was thought that he acted rather meanly and discreditably when he accepted, for a war fought against slaves, the minor honor of a procession on foot, called the 'ovation'."

Although the 6,000 survivors had formed four groups in an effort to keep up resistance, they were soon defeated, taken prisoner, and crucified along the road from Rome to Capua.